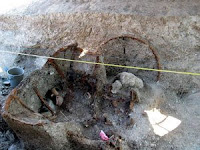 Aug. 7, 2008 -- Archaeologists have unearthed a 1,900-year-old well-preserved chariot at an ancient Thracian tomb in southeastern Bulgaria, the head of the excavation said Thursday.

Daniela Agre said her team found the four-wheel chariot during excavations near the village of Borisovo, around 180 miles east of the capital, Sofia.

"This is the first time that we have found a completely preserved chariot in Bulgaria," said Agre, a senior archaeologist at the Bulgarian Academy of Sciences.

She said previous excavations had only unearthed single parts of chariots -- often because ancients sites had been looted.

At the funerary mound, the team also discovered table pottery, glass vessels and other gifts for the funeral of a wealthy Thracian aristocrat.

In a separate pit, they unearthed skeletons of two riding horses apparently sacrificed during the funeral of the nobleman, along with well preserved bronze and leather objects, some believed to horse harnesses.

The Culture Ministry confirmed the find and announced $3,900 in financial assistance for Agre's excavation.

Agre said an additional amount of $7,800 will be allocated by the Bulgarian Academy of Sciences for an initial restoration and conservation of the chariot and the other Thracian finds.

The Thracians were an ancient people that inhabited the lands of present day Bulgaria and parts of modern Greece, Turkey, Macedonia and Romania between 4,000 B.C. and the 6th century, when they were assimilated by the invading Slavs.

Some 10,000 Thracian mounds -- some of them covering monumental stone tombs -- are scattered across Bulgaria.

A Thracian chariot may turn to be the gem of this year's archaeological season. The excavation works at the village of Borissovo, Elhovo region, continue at full tilt. The members of the team of Daniela Agre from the Institute of Archaeology to the Bulgarian Academy of Science expressed their delight at the unique find:
"The word is about a fully preserved chariot of a Thracian aristocrat dating back to 1st century AD. This is an unprecedented find, as it is the first chariot found on Bulgarian territory untouched by time and preserved in the state in which it was once buried," the archaeologists explained.
"The chariot is a part of the treasure with which a local Thracian nobleman was once buried. The sacrificed horses lie just at the spot where they had been sacrificed; the nobleman's dog is buried behind the chariot's rear wheel. This discovery gives an explicit answer to the question how a real Thracian chariot looks like, " Mrs. Agre stressed.
Not far away from the chariot the archaeologists have unearthed the debris of the Thracian aristocrat's residence, which was notable for its spledour: its basement was made of precisely carved stone with marble pillars.
In the meantime, it became clear that the Ministry of Culture will allot 5,000 levs and the Bulgarian Academy of Science will grant 10,000 levs for the initial restoration and preservation of the Thracian chariot.
Konstantin Sabchev
Posted by Kas kõik on just nii nagu paistab ? Aerling. at 23.12